Why Stocks are Tumbling 6 Years into the Bull Market

In a follow up video this week, I’ll start to dissect each and give you my opinion about the long term effect of each.

I like to look at long term effects, not short term gyrations.  The fluctuations have always been there, and always will be.

Full Article: Why Stocks are Tumbling 6 Years into the Bull Market 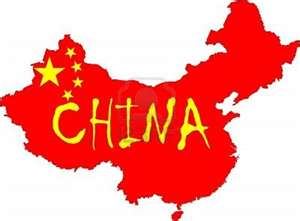 China Had a Trade Deficit in February

China had its largest trade deficit in 22 years this past February of $31.5 billion.

Why? Weaker demand from Europe and the United States is one reason. Factories being temporarily shut down due to Chinese New Year could be another reason.

Is this seasonal anomaly or one more bad sign coming out of China? 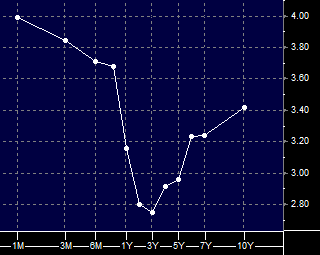 An inverted yield curve in the US has predicted 6 out of 7 worsening economic conditions in our country since 1970.

In China, we don’t have the same type of statistics because of their young open economy, but recently their yield curve has “inverted”.

I’m watching this and realizing it’s just another of many economic indicators out of China pointing towards a slower economy.

I really don’t want much (if any) exposure to the Chinese Stock Market.

This also has consequences to the whole global trade market as China is the 2nd largest economy right now. We truly are a global economy, and what affects China affects the US.

Stay tuned to my newsletters this year as the China story unfolds. 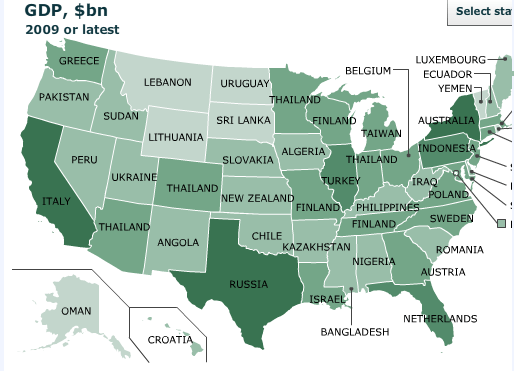 The United States is the largest GDP in the world. How do other countries stack up to individual states? See for yourself.

The 3rd Quarter 2011 is over and I have a slightly longer video this week because I want to address the current environment and how things may shape up going forward.

A big theme is my advice to assess your overall plan and risk tolerance, and also to ensure you’re looking at both positive and negative points of view on the markets instead of just one view over the other.

I send my newsletter and videos on a weekly basis, so if you watch only a few througout the year, at least watch my more comprehensive quarterly videos.

Where Do We Go From Here?

I’ve had a relatively low position in stocks for clients for quite some time, but I’ve decided to lower it even further. I’m quite concerned about the correlation between Europe and the US, emotion/news driven volatility, and the uncertainty about what the Fed will do.

The risk just doesn’t warrant having as high a percentage as I’ve had.

On the flip side, profitability, efficiency, and cash balances have all been rising in the firms that comprise the S&P 500.

Is the return worth the risk?

Hi there, Mike Brady with Generosity Wealth Management, here in Boulder, Colorado and the question is “where do we go from here?” And we’re getting a lot of conflicting information.  In the last month or so we’ve had huge volatility. We’re basically in a trading range, we have been for the last three or four weeks, but it’s been a trading range that’s extremely volatile.  And we’re talking a half percent to one percent up over a few days and then “Boom!” a negative two, three, four percent.

We’ve seen the correlations between the European markets and the U.S. and Asia; very high. And as we look back, five, ten, twenty years, the correlations for the international market have become increasingly correlated. We’re a global market now. And so what happens in Europe is, irritatingly, affecting our situation here today.

Philosophically, I’m going to go off on a kind of a slight tangent here. I understand that the government will always be a part of our free market system. It’s never been 100% free. However, the interaction we’re having now, it’s like this 900 pound gorilla in the room; that makes things kind of difficult.

Kind of on the flip side, as we’re looking at some of the positive things. We’ve got almost all of the S&P 500 have done their earnings for their second quarter. And year over year growth is about 12% over the previous year. And if we take out some of the financials, we’re talking almost 20% earnings, net earnings growth.

You’ve got net margins, back in 2008, that’s efficiency of almost 6%. Now we’re going all the way up to 9.27. So when you look at companies, at balance sheets, Apple’s got 76 billion dollars in cash. I mean a lot of these companies have cash on the side-lines, they have been very efficient. Unfortunately, the negative effect of that is they have trimmed their work forces. But as you’re looking at some of the larger companies, the S&P 500, they’ve become very efficient over the last three or four years. They’ve kind of trimmed, as they see it, the fat, and they’re sitting on huge sums of investable assets that they can redeploy at some point. They’re just not redeploying it right now. And so that’s very frustrating.

I am, long term, when I say long term, we’re talking three to five years, bullish on the market. I think that, you know, we’re set up for that. But on the flip side, I mean, I hear all the arguments about how Europe is imploding- which it is. How that’s going to drag our financial system down. What’s going to happen with the EU and the Euro is anybody’s guess. And so, there’s a lot of reasons right now where it could go either way. I mean I just want to sit here and admit that.

What I’m doing, in my portfolio, is I am decreasing some of the equity positions that I have. I’m absolutely going to continue to have some. But from the very conservative to the very aggressive models that I have for clients, I am decreasing the equity positions. Most recently, most likely in the next week or two, we’re going to hear what, if anything Bernanke and the Fed is going to do. We’ve been talking about a little bit about this twist where they buy a bunch of medium to long duration treasuries- to shore up…, well to keep interest rates low.

So, you know, there’s a lot of things in play but I’m just telling you that right now I’m going to decrease my equity position. The market could go up. Once again, I’m going to be happy three to five years from now. But right now, it’s kind of hard to analyze which way it’s going to go. And in that particular case, are you getting the return for the risk that you’re taking and right now I’m questioning that. So I’m going to reduce some of my equity positions and decrease the percentage, of course still stay in the game.

I have a new blog on my web site, www.generositywealth.com. And I highly encourage you to go there and look at it. I’m going to have archives going back a number of years. And I think it hopefully will be, I think it will be very helpful and very interesting as you go back maybe two years of weekly or every other week, videos like this or other things that I’ve found interesting and (some) analysis. So you can go and get a flavor of what I’ve been talking about for the last couple of years.

I am taking new clients I would love it if you gave me a call or passed this video along to someone who might be interested in a comprehensive wealth management firm, Generosity Wealth Management, that’s me. You have a wonderful week, we’ll talk to you later, bye, bye.