As the quarter is now over, it’s a wonderful time to reassess our mindset–do we have an investor mindset or a trader mindset?

An investor understands the long term and is not deterred by short-term events. They do not look for reasons to be pessimistic or instantly act upon a negative reaction.

A trader mindset does that. Short-term events are important, even if you’re invested for the long-term.

This was a tough quarter, and negative. Negative quarters are part of long-term investing, and what investors will experience periodically.

Let’s take a look at what we’ve seen so far in 2022 and compare it to years previous.

I want to take us back to some recent history, just the first quarter of 2020.  Covid hit, markets down 20%, 30%, 40% in the unmanaged stock market indexes and everything just looked horrible.  At that time I said, “Hey, I think this is an overreaction and an oversold position.”  But never in my wildest dreams did I imagine that by the end of 2020, not only had the unmanaged stock market indexes and the unmanaged bond indexes had recovered what they had lost, but they then went into strong positive territory.

So, 2021 which was last year, nice positive territory again.  The first quarter of 2022 is negative for the unmanaged stock market and bond indexes.  That’s part of the game.

One of the recurring themes that I have in my videos, whether they’re within the quarter or at the end of the quarter like this one is, is that we need to have an investor mindset, not a trader mindset.  The difference is an investor understand the long term and is not deterred by short-term events.  Does not look for reasons to be pessimistic.  Does not say to him or herself, “Okay, it was so obvious,” or, “Oh my gosh, I should have been able to avoid that.”  No, that’s a trader mindset.  If a quarter of decline is not something that is palatable, then you have either a trader’s mindset or you really should not be in the stock or bond markets at all.  It’s just that simple because it will always happen.

If you are an investor anywhere in the U.S. or the world, you have a portfolio that is probably down so far this year.  But what history has shown even if it is in correction territory, which is what we have been in, correction territory is negative 10%.  I’m recording this on Thursday, March 24, so I don’t know exactly how the quarter has ended.  But if it’s around 10% that’s correction.  A bear market is 20% negative or greater.  If it’s negative 10%, what history has shown is that 75% of the time it’s positive again a year to a year-and-a-half out.  And sometimes it’s longer.

When we look at major, major impacts like 2008 and a blended portfolio of 60/40, it took about three years to recover.  However, that stands out in memory because it’s so unique when events like 2008 hit.  So, 75% of the time going back decades it has recovered within 12 to 18 months.  And that’s part of the process of being an investor.  Having the temperament to remember that no, we should not have short-term vision.  We should not have a short attention span.  We need to think about what does this mean for the long term because you don’t invest for the short term, you invest for the long term.  You trade for the short term and that’s not what we’re doing.  We’re investing for the long term.

As we look to see what this actually means – I’m kind of curious but I’m watching it very closely.  What does globalization look like with China and Russia? What does globalization look like with the supply chain breakdown over the last couple of years?  Is there more onshore versus offshore?  Are we going to bring a lot of that manufacturing, a lot of the being self-sufficient from an energy point of view to our country?  Is there going to be more of that with many countries throughout the world than there is now.

We’ve become interdependent which is a good thing in my opinion.  It’s better than not being interdependent with others, but this is a shake to the system.  The geopolitical events that are happening is reshaping how Europe sees itself and it’s reshaping how the world sees its supply chains and its dependency.  Does doing business with someone mean that they won’t invade you?  No.  The answer is no.  We’ve just seen that.  Does it mean that you can be a pariah and still invade your neighbors even though you’re part of the global economy?  The answer is yes.  So, what are the longstanding impacts of this is what I’m always looking at.

When we look at things from a portfolio point of view, from an investment point of view, there is still huge cash reserves by the main companies in the S&P 500 which is an unmanaged stock market index, the Dow, et cetera.  The Apples of the world, the big companies have huge cash reserves and this is a good thing.  They have seen and weather bad things over the last 10 to 15 years, and the alternatives of cash – just putting your money into a CD – is very unattractive. 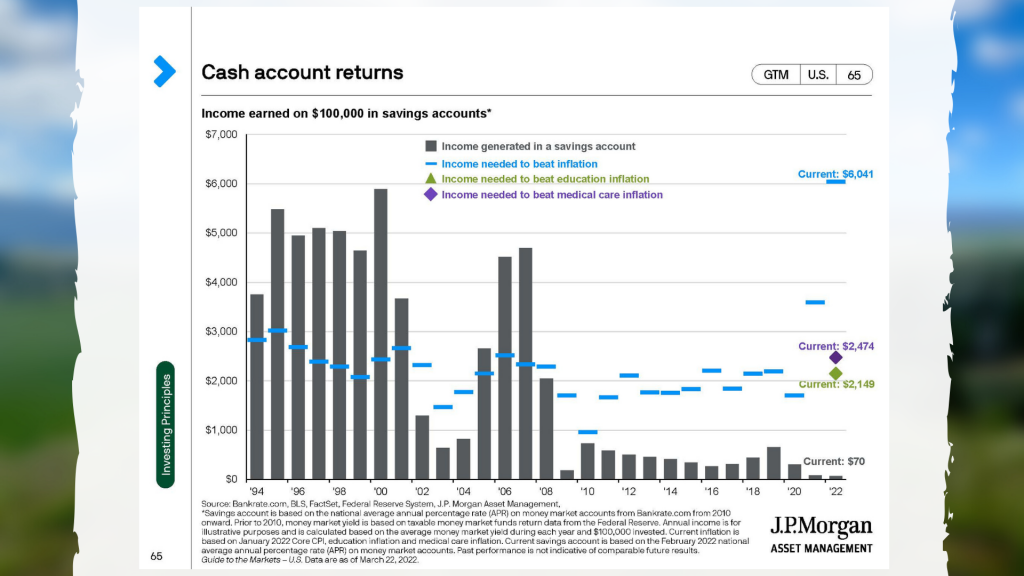 So, I continue to be a long-term investor and recommend that for clients.  Volatility is something that with experience you become well, experienced.  That’s why we call it experience.  And so that’s something that you have to live with.

That’s it.  Things are going to be down for this first quarter.  That’s the way the temperament of an investor has to acknowledge.  I love what Warren Buffett says.  “In times like this, it transfers money from the impatient to the patient.”  Give or take a few billion dollars, he and I we hang out in the same crowds – I kind of wish.

Mike Brady, Generosity Wealth Management, 303-747-6455.  Give me a call.  Let’s hope the second quarter and third quarter and as things move forward when are we going to break even again?  We don’t know, but history has shown that it does break even.  Not a long time, but usually in a short time.  Thank you.  Have a great day.