“Your net worth to the world is usually determined by what remains after your bad habits are subtracted from your good ones.” -Benjamin Franklin

Many folks are worried about market volatility and yield curve. Whether it’s an inherent worry or a byproduct of negative news coverage, it’s helpful to know if it is warranted or not. Some people are excessively worried about airplane crashes, when the greater worry is driving to the airport. But, the first one is dramatic and gets media attention, whereas the second doesn’t.

In this month’s video, I discuss:

Hi there. Mike Brady with Generosity Wealth Management; a comprehensive full service financial services firm headquarters right here in Boulder Colorado. Although you can probably tell by the background that I’m actually at Generosity Wealth Management North, which is up in Wyoming where I do spend some time up at the cabin getting away thinking about the business getting my thoughts in order. Now, the last couple videos I’ve done up here, and you probably have this perception that I’ve been up here the entire summer and it’s just not true. I was in Boulder all of August and all of June and part of July. I just got up here three or four days ago and decided to do the video. I’ll be back in Boulder for the rest all the year and all the way till next June in just a couple of weeks after working up here.

Now, you’re probably wondering why I picked this particular spot in order to record the video. Is it the most beautiful spot? Maybe not. Is it the least windy? Yeah it’s kind of windy up here in Wyoming right now. Is it kind of shady and it’s really sunny out? Yeah it’s shady. But what I’m really proud of is that wood pile right over there that I spent an entire day cutting and stacking. I mean isn’t that a good looking wood pile? I can’t wait to burn it. So, that being said let’s move right on.

The first thing I’d like to talk about is volatility. Someone came up to me two or three weeks ago and said oh my God things have been so volatile it’s just so painful. My answer is has it really been volatile? 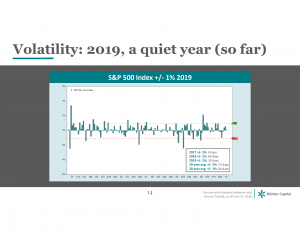 Up on the screen you’re going to see a graph you’re going to see a bar chart and that is 2019. And on the far right hand corner you’re going to see that the ten year average for plus or minus one percent in movement in one day 72 days in a year. Thirty year average is 86 days. So, 72 to 86 days is the average over a ten or 30 year timeframe for there to be a movement in one day, which means some volatility of one percent or more. In 2017 there were only eight days. I mean it was remarkably smooth. That’s what we got lulled into believing was the normal. 2018 it was a tough year we still were below average at 64 days. And then the number that they have there is only as of June 30 so I pulled my records myself for the unmanaged stock market index S&P 500 and so far this year in 2019, as of September 3rd, which is yesterday, I’m doing this on September 4th, we have 32 days out of 171, which is almost 19 percent, that are plus or minus one percent movement in one day. That means 80 percent of the days are less than a one percent movement, one percent or less. Two percent those are big movements, there’s only been seven days out of 171, which is four percent. Four percent of the days have been two percent or more.

So, I’m repeating myself 80 percent of the days have been relatively low in volatility and we definitely are below the average, both the ten and the 30 year for volatility in a year. So, some things that we believe just aren’t true. We might believe very strongly, we might see it on the news and they pump it up and they get you all excited and that’s not helpful to you. One of the things that I talk about with people is let’s be worried about the right things and this isn’t one of the things to be worried about at this point. So many people are afraid of flying, I mean really their fear should be driving to the airport. That’s significantly more risky statistically than actually being in the plane. Being in the plane is just a more dramatic way to have an accident and there’s no walking away from that.

Now, the yield curve we’ve heard a lot about that in the last two/three/four weeks or so. Am I worried about it? The answer is no. The way a yield curve works is you should have a higher return on your yield on your bonds as time goes by, ten years, 30 years, than you should in the short-term. If that gets reversed where you are actually penalized for holding it for a long time then that’s an inverted yield curve. Yes this has given some indication in the past. The averages are long it’s usually a year or two before there is a recession. My argument would be that that’s not the thing that we need to worry about. The fact that it’s become so common the fact of observing an action sometimes changes that action, it really has to depend on what the Fed does. And so, am I worried that this is going to lead to a recession? The answer is no. Recessions are remarkably, particularly in the last 40 years, infrequent. We had one in ‘73/’75, that’s one, 1980 that was almost 40 years ago, ‘81/’82, early ‘90s, early 2000s, 2007 so that’s six. That’s six of them in 50 years. So, people might say yeah but then we’re due for one. Well, maybe, maybe not. Some of the factors that led to those recessions are not here today and just because it’s been a while since we had the great recession of 2008 that doesn’t mean that we should have one now. It doesn’t have a timer an egg timer. The question is how hot is the economy and how does that relate to the market?

We have had a remarkably, not remarkably, an underperforming, a mediocre is probably the better word, a mediocre recovery since the great recession. And that’s not necessarily bad. I mean if we have a really hot market those things that go really high can come down. It’s like a bright shining star that can 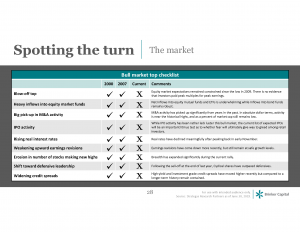 burst and fizzle out very quickly. We’ve had a slow burning star for the last 10/11 years and this is a good thing from my point of view. It leads me to believe that it does still have some life. We don’t have high valuations, overly crazy high valuations in the stock market, we haven’t had a lot of the other actions that precede a stock market decline in a recession like people throwing all their money into equities and other things like that so I’m not worried about it.
And the yield curve that’s just one indicator. We joke in our world in the financial services world that economists are always predicting recessions. They’ve predicted nine out of the last three recessions. And so, considering that we’ve had 75 percent, three out of four years are positive, I would rather invest looking towards that than worrying about maybe there’s a recession, which might lead to a stock market decline versus hey I would rather be invested keep this long-term and work on my odds that I believe are in my favor of being in the market long-term. Short-term the recession might happen and if you are in a job that might be recession, the opposite of recession proof capable of being hurt by the recession that’s very sensitive, recession sensitive, then yeah you should worry and make sure that you’re saving a lot in order to whether that particular storm. If you’ve got investments now is a great time, in my opinion, to continue with that strategy going forward.

That’s what I’ve got this particular month. Mike Brady; 303-747-6455. While I’m not always in the office I am always available, email, phone. And one of the things I pride myself on is being particular. Every day is a Saturday and no day is a Saturday as far as I’m concerned because this is what I do and this is what I’m going to do for the next 20 years so I’m very excited about it. To end it here I’m going to take a little pic. There we go. We’ve got that picture right there, which is – can you see that? And we’re going to go around there as well all the way towards our truck. So anyway, you guys have a wonderful, wonderful month and I will talk to you in about a month. Bye bye.