“I find television very educational. Every time someone turns it on, I go in the other room and read a book.”
― Groucho Marx

Last month’s inflation was 4.2% year-over-year percentage growth. That’s a large number and if you get your news from the TV news outlets, which we highly recommend you don’t, you are likely up in arms.

The news outlets are there to elicit emotion from you. If you’re going to have a detailed analysis of a complex system like the world economy in two minutes or even five minutes, watching TV news is not going to give you what you need to make an informed decision. Even the news programs on dedicated financial news channels is not where we get our analysis. We always turn to economists that we’ve learned to trust so that we can provide our clients with clear and concise updates.

So, is now the time to panic due to inflation? No, we don’t believe there’s ever a time to panic. But is there a time to be concerned about the impact to you, your life, the economy, your portfolio, things of that nature? Well, that’s not quite the right question to ask. The real question should be, is this temporary or is this systemic?

Watch to hear the answer and a full discussion on inflation.

Hi there. Mike Brady with Generosity Wealth Management, a comprehensive, full-service financial services firm headquartered right here in Boulder, Colorado. Although I’m hoping that this will be the last video that I do in Boulder for the next four months or so, it’s the end of May. I’m going to head up next week to the cabin and, as you know if you’ve been watching my videos for a long time I can do everything I can do here in Boulder right there from my cabin. It’s 30 minutes outside of a 900-person town overlooking these beautiful mountains and pastures and all that. This next summer I’m very excited because they’re going to put in fiber optics right to my cabin. The whole valley there is getting fiber optics so thank you Rural Electrification Act, whenever that was.

Listen, I want to talk today about inflation. Last month’s inflation was 4.2% year over year percentage growth. That’s a large number and I have to tell you that if you get your news from the TV news outlets, which I highly recommend you not do, you, of course are probably all up in arms. Let me just address something that I said there. It is my belief – just my opinion and you can have a different one – that news outlets are not there to inform you. They are there to elicit emotion from you. If you’re going to have a detailed analysis of a complex system like the world economy in two minutes or even five minutes, watching TV news is not going to give that to you. Even the news programs, the dedicated financial news channels, that’s not where I get my analysis. I get my analysis from economists that I’ve learned to trust – Alex Tabarrok and Tyler Cowen and others and their detailed analysis. They’re usually writing every day great blogs. I post them in my newsletter periodically.

But the question is, is now the time to panic due to inflation? And the answer is no, I don’t believe there’s ever a time to panic. But two, is there a time to be concerned about the impact to you, your life, the economy, your portfolio, things of that nature. So, it’s the wrong question frankly. The real questions are is this temporary or is this systemic? What are all the factors in it? What are the conditions today that might be similar or dissimilar from the last time we had huge inflation which was in the 1970s, and people always go back to. There’s an old adage that every general is fighting the last war. Well, let’s make sure that we’re not fighting the last war against inflation because things were significantly different in the 70s. I mean think about the cars and TVs and microwaves that you had back in the late 70s, or your VHS which was probably a Betamax. I mean things are a little bit different 40 years later. The response and the understanding from an economic point of view about how the economy works has also evolved over that timeframe. It doesn’t mean that we shouldn’t be humble about the future because it’s about the future. Nobody knows exactly what the future holds.

So, let me get back to some of those questions that I’ve thrown out there. Let’s remember that 12 months ago pretty much everything came to a stop. So, the demand for our goods and services came to a screeching halt in general. Now, we’ve got an economy that is almost like a postwar growth economy. The demand for products and services is super high. Is the supply there to meet? No, not necessarily. I mean I was going to finish my deck on my cabin this summer and I can’t because wood has gotten super high. Right now they’re up at my cabin building a new water well and it’s costing me significantly more because of all the metal shortage for the piping that goes down to the aquifer. These are short-term demands that are not being necessarily met by supplies and by the supply chain.

Now, let’s step back for a second. By the way, before I complete that thought, these are short term. When there’s a huge demand there’s other people who come in that will meet that demand whether it is done in one month, one year. But it doesn’t mean that everything is doomed from here on out. At a certain point there is a give and take with supply and demand. There’s never a perfect amount of supply. There’s never a perfect amount of demand. Sometimes they get out of whack and for many core inflation items that’s the situation right now.

That’s one of the things that continually surprises me is from a stock market point of view, we know that every year there are going to be, in most years – not every year – but in most years there is a double digit decline within the year. So the market might go up a certain amount and then it usually goes back and forth. Four steps forward, three steps back, et cetera. And when that happens it’s like it’s never happened before. Some people get very excited about it. I’m not sure that helps getting excited about it. Inflation is the same thing. Inflation goes up and it goes down. It doesn’t always go in a straight line.

So, let’s talk about what that really means for the market. So, I’m going to put up one sheet – that far right hand – I’m circling it in red. That is what happened last month. That is over the last 50 years or so you can see that what I just circled is what happened. It went over 4%. It’s 4.2%. These things happen. The last time that happened was 2007 right before it declined. There’s some huge fluctuations there but one month does not make a trend. So, let’s remember that and we have a datapoint of one. Let’s not blow it out of proportion. 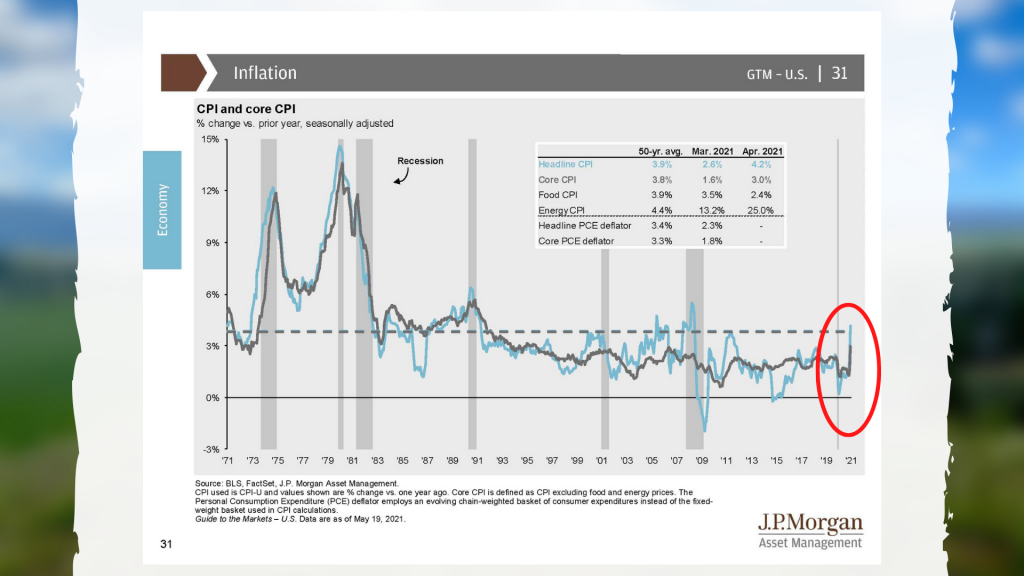 So, what happens? There’s this perception that when the inflation goes up, therefore the stock market is going to go down. That’s not true. Here I have just highlighted that bottom left quadrant and this is when we have low inflation and inflation is rising. What has happened? On average since 1988 – so that’s the last 30 years or so – the four times that has happened the market has increased over the next 12 months. That’s not a guarantee. This next time it could be different. We’re talking about the future here. But if there’s some knee jerk that inflation goes up and stock market goes down, that’s just not the case. 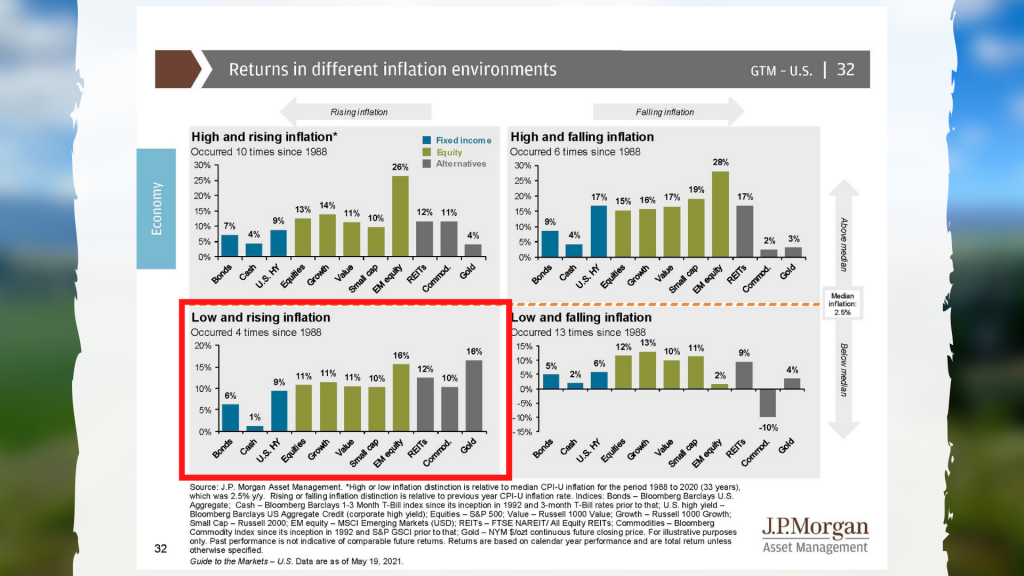 You’ve heard me before talk about duration and how important that is. As a matter of fact, the longer I am in this industry and the longer I work with clients and with money and financial planning, yada, yada, is the more important I believe the duration is which means hey listen, if you’re going to ask for a guarantee from me that the market won’t go down over the next month or two I couldn’t give you that. I could never give you a guarantee anyway. However, when we look out one year, two years, five years, ten years – which is what we should do – inflation has not been the deciding factor of whether or not you’re successful or not. If you need the money in a month or two or even six months you shouldn’t have that amount of money – you should have it in money market or in cash ready and not invest it however we’ve got our stuff for a longer term.

One of the things in the 1970s that’s different from today is it was stagflation, remember. A stagnant economy with inflation and high unemployment and all these things. We have low unemployment that’s decreasing. We have an economy that is growing, not stagnating. But yes, we have one month, one datapoint of inflation from an incredibly strange and bizarre event 12 months ago to lead us to an inflation year over year. So let’s not extrapolate this out. Let’s not panic and let’s not do anything.

One of the hardest things is to not do something at times. And many people say what, we’ve got to do something. You know what? “At least I’m trying. At least I’m doing something.” No, sometimes doing something in a knee jerk reaction is the worst thing that you can do. And the best advice that I can give as your financial advisor is not to do anything. Frankly, some of the best advice that I have ever given in my career was 12 months ago or 13 months ago or 14 months ago when it was like “hey, get off the ledge”. Don’t do anything because the real people who got hurt were those that panicked. And by the time that you, as the end consumer, hear the news from that news TV channel, it’s already been priced in. It’s already happened. And so if you feel you’re getting ahead of the game, you’re not. The best thing that we can do is keep our eye on the ball which is not panic. Let’s realize that inflation, not a big deal right now. What is really inflation? Is it relative or is it nominal? Is it short term? Is it systemic or is it temporary? These are the things that we need to ask ourselves. And right now, no. The warning flags are not out there. And know those who are economists, who are really managing money, the ones that I read are not panicked, which therefore means I’m not panicked and you shouldn’t either.

Mike Brady, Generosity Wealth Management, 303-747-6455. I hope to see you soon I suppose. I’m going to be up at the cabin, but I have so many Zoom meetings. Hopefully we’ll have those Zoom meetings as well. I think I’m going to grow a beard like I did last November and turn into true mountain man except when I’m working during the day. Have a great day, a great beginning of the summer. Bye-bye now.