Don’t Miss the Forest for the Trees: End of 3rd Quarter Market Update

Don’t miss the forest for the trees. While some say timing is everything, with investing, it’s long-term goals to have in mind. The length of the long-term may vary, however the focus is the same- keep your eyes forward and don’t let it stray towards little ups and downs along the way. It’s often three steps forward and one step backwards, so don’t make long-term decision based on short-term feelings.

Listen as I review the 3rd quarter.

Hi there.  Mike Brady with Generosity Wealth Management, a comprehensive full-service financial services firm headquartered in Boulder Colorado.  And this is my last video that I’m doing from my cabin up in Dubois Wyoming.  Quick little jaunt down to Boulder but I’ve pretty much been here since mid-May.  It has been wonderful.  I’ve had the opportunity to take some time to reflect.  I think I told you that at the beginning of the summer that I believe in deep work meaning deep focus and I’ve made some huge changes this year kind of behind the scenes hopefully you’ll see.  All good, of course, things that I’ve been thinking about.  Also looked at some managers and got rid of a couple of managers and added a couple of managers.  This has for me personally been one of the best summers of my life up here continuing to run the business.  Many of you I’ve had meetings with via Zoom or on the phone.  I’ve continued to add new clients.  I’ve had some of the best projects and most fun projects in a long time and it was nice to have  less hustle and bustle because I’m 30 minutes outside of a 900 person town and so I might go into town once, maybe twice a week but other than that I’m in this beautiful cabin with five acres right next to two million acres of forest land and that affords me the opportunity to really focus and to concentrate and work on kind of big picture things, which I think is very helpful to me and hopefully helpful to you as well.

So, I’m recording this on Friday in the evening after the market has closed on September 25th.  You’re going to get this hopefully, if everything works out okay, right at the end of the quarter September 30th, October 1st give or take.  And so, I’m not exactly sure what the numbers are but I do know that I’m going to put a picture up on the screen, this is the unmanaged stock market index the Dow Jones, you’re going to see that January getting into February it was up and then February and March were absolutely horrible; that’s when the impact of COVID started to be felt.  At that time if you recall and go back to the videos that I made I believe that it was oversold and I’m like wow this is a huge reaction we’ve got to see how things play out.  And then what we saw is April, May, June, July, August, five months of a very quick recovery.  February through March was one of the quickest and deepest declines ever in kind of recent history.  Of course, the recovery has also been one of the quickest and sharpest recoveries.  The month of September wasn’t good for the unmanaged indexes; it’s that simple.  But you know what?  Every month isn’t going to be positive and that’s the way it works.  You take three steps forward two steps back at points and if you only focus on the steps back then you don’t have the steps forward. 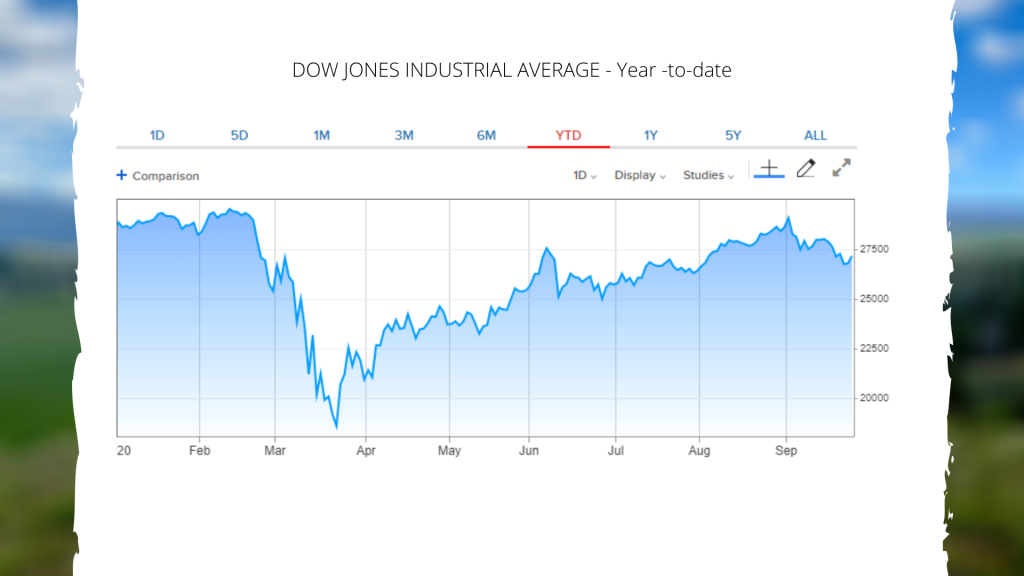 There are people that I talk to you every once in a while who are so focused on buying at the right time that they actually never do anything they never really invest because they’re so focused on well I might buy in or invest at the wrong time and then it will go down and that’s a very short-term thinking.  If you’ve been paying close attention there are certain themes that I repeat over and over again in my videos and one of them, of course, is you don’t make long-term decisions based on short-term feelings or short-term information.  In my experience has been if you’re so focused on what’s happening in the short-term you miss the big picture, you know, he trees in the forest if you’re so worried about the various trees you’re going to completely miss the entire forest and then it’s too late.  I don’t know what else to say.

I believe that our emotions are very important to keep in check.  You’ve heard me over the last year or so say that if you’re watching the news, it’s my belief, particularly if you’re watching the news it’s not there to inform you, it’s to incite your emotions.  And so, I say that because over the next one to two months in particular in a political year your emotions might be even more vulnerable than normal.  And so, keep that in mind and protect yourself.  It’s one thing to have the emotion, it’s another to act upon it so it’s better to not have it but if you’re going to have it at least don’t act on it and so that’s one of my big pieces of advice.

I had this kind of ah-ha moment here at the cabin.  We built a deck, we did a foundation for a shed, we do various things and it’s kind of interesting that I have anxiety about those projects.  Are they going to get done right?  Are they going to be done on time, et cetera.?  And mainly my participation in it.  I mean maybe there’s a good reason why I’m not a doctor because sometimes I’m working on a project and something happens and I’m not quite sure how to get myself out of it.  That’s why I say something about a doctor maybe the patient is open and they started bleeding I’m not sure I would stay calm and know what to do.  But then I also look at what I do for a living.  I basically invest and watch over people’s entire life savings, their retirement, their kids and their grandkids and I don’t bat an eye.  I mean right now I’m actually working on some really interesting situations for some existing clients and brand new clients that are really kind of complicated and quite large amount of money but I don’t bat an eye.  I mean it’s completely fun and wow this is a great puzzle that I get to solve.  I’m quite grateful.  And unlike when I’m out working it’s like wow I’m not sure how to get out of this.  So, a lot of it I think it has to do with experience and what you’re comfortable with.  For me I’ve done what I’m doing so many times that I have a certain intuition.

I’m reading a book right now called Thinking, Fast and Slow or thinking slow and fast I can’t quite remember, but they said something that I thought was really good.  They’re all talking about intuition and they say that intuition is really just recognition that you are recognizing something from before, a pattern or whatever so that really boils down to experience.  Intuition is really just recognition even if you don’t know it.  And so, I recognize that in myself I’ve done it so many times I have an intuition about what the answer might be and of course I’ve got to check that because sometimes you have biases as well.  I’m a big believer in knowing what your biases are and being mindful of them, but it’s also important to know that experience means a lot.

So, we’ve just come through a deep downturn earlier in the year, we have just experienced a huge recovery and I think everybody was surprised by how quickly it recovered.  That is not normal.  Let’s remember how we felt this year.  Let’s remember the decisions we made so that we can remember it the next time it happens again.  Remember, the market sometimes goes down so let’s not freak out when it does because we know it’s going to.  Once again, it’s good for us to remember this so that pretty soon we too start to recognize the pattern of wow it goes down, it goes up but the reason why I’m invested is because it’s for the long-term.

One more thing I want to say before I say goodbye is I’m also a huge believer in knowing what your timeframe is.  Absolutely essential.  One week is completely different timeframe than ten years.  Two or three weeks ago the NASDAQ, which is an unmanaged stock market index, was really going down.  And so, my friend said I’m totally getting killed, I’m just losing so much money.  And I couldn’t help but wonder really in one day or two days when it’s just come up tens and tens percentage points in the last for five months you’re going to decide your happiness for the day based on one day or even one week?  It’s good to know and keep in mind the long-term picture.  Absolutely essential.

Mike Brady, Generosity Wealth Management 303-747-6455.  Quarter end statements will be going out very soon.  I think you’ll be very pleased.  We have one more quarter in the year and as always I always am very optimistic and really looking forward to hopefully a good end to the year.  If not it’s okay we don’t make decisions based on one quarter or even one year.  Have a great, great day, great week.  Bye-bye.