Humility, like gratitude, is not so much a technique as it is a way of life.” – Ed Latimore

Tough 2022 Year,, which should remind us of the need for keeping the big picture in mind. While your goals may change, having a steady and reliable plan is crucial all year round.
In my latest video, I review the year in detail, and talk about what made 2022 such a horrible year. There is no sugar-coating it, practically every market sector lost money.
What does 2023 have in store for us? Is there anything to be optimistic about?
Watch the complete video to hear me talk about how one year does not a long-term plan make.
Transcript

Today is my 2022 Year-In-Review, and our 2023 Preview. I’m recording this on December 26. I want to do it even before the end of the year is over, because I want to get it out to you as quickly as possible.

What’s interesting about 2023 for me personally is this will be 32 years of doing wealth management, meeting with clients. There’s an old adage that says that history doesn’t repeat, but it certainly does rhyme. That’s one thing that I’ve noticed as I’m talking with people and watching TV is this inherent conflict between fear and greed.

As I mentioned, I’ve doing this for 32 years, so when I started it was the high-yield bonds were all the rage, and then from high-yield bonds it went into the mid-90s went to – well, gosh, you should be doing day trading yourself – it’s so easy and the tech bubble. That led to – after that, it was in the 2000s real estate and we had kind of the crisis in 2008. At that time, I remember a lot of people then ricocheting, you know, kind of going to the other extreme saying, no, gold is where things were in the 2010s, which then led to, well, no, I’ve now got to chase Cryptocurrency. “If you’re not doing Crypto, you’re kind of just old school.”

Well, you know what I’m hearing a lot on the news or as I’m talking with people is individual stocks. “No, we’ve got to do individual stocks or where we’re going to do these individual stock plays.” I stay firmly , even though the last year has been horrible. I do want to acknowledge; it has not been fun. I’m going to talk about that in just a few minutes, of having a broad-based, market-based investments that’s long term. And long term is multiple years, not one year. If you make long-term decisions based on short-term events, eventually that’s going to cause you to pinball from one investment strategy to another investment strategy and, unfortunately, there is no end to the number of people who will promise what you want to hear. I just don’t want to do that. I don’t think that you’re well served by trying to jump from strategy to strategy. I stick by the broad-based, market-based third-party management strategy because long term I believe that that’s been the best strategy for investors and best strategy for you as well. 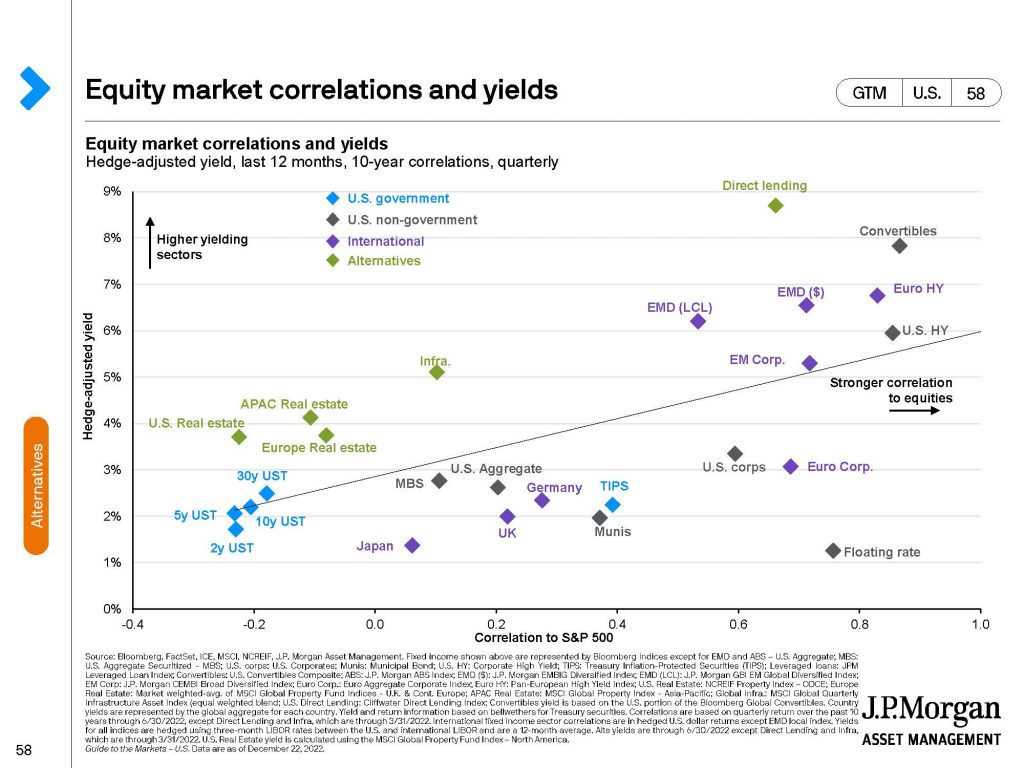 Up on the screen, up on the left-hand side you’re going to see – on the bottom axis there, the X-axis is correlation to the Unmanaged Stock Market Index (S&P 500). The more to the left you are, the less correlated. That means that when it zigs, it zags, okay. If the – it actually does the opposite. So that’s why those U.S. Treasuries are there on the left-hand side over the last ten years. When the stock market’s gone up, it’s gone down. The other way around. There’s not much correlation to the Unmanaged Stock Market Index.

The same thing with Treasury Inflation-Protected Securities, which I’ve just circled. And U.S. Aggregates, which are bonds. So, bonds in general are a great thing to couple with some kind of an equity. This past year, that did not happen. We’re going to talk about it in just a second.

This next graph up on the screen is the last 30 years of the Unmanaged Stock Market Index (S&P 500). You’re going to see this year we gave away two years’ worth – about two years’ worth of growth. We’re back to where we were two years ago; it’s that simple. It’s not that you gave up ten years’ worth, or 20 years’ worth, no. We gave up a couple years’ worth. Not fun. Not trying to say that it’s good. We want to make money as many years as we can. 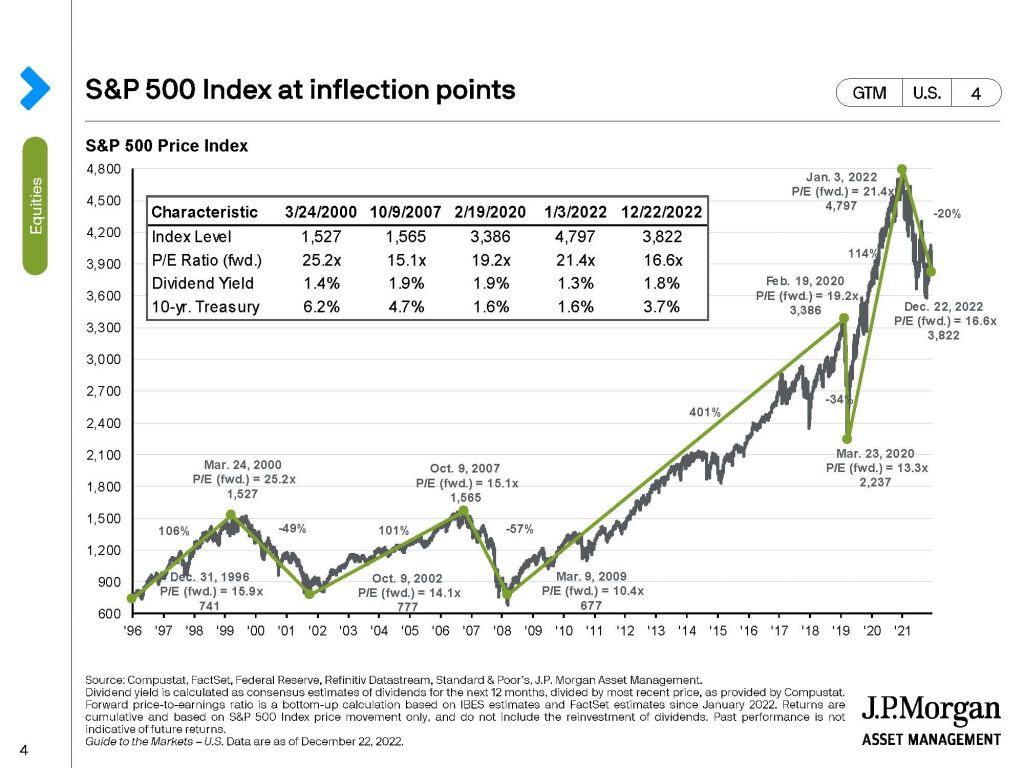 This next screen, I’ve just circled, kind of put a square around the box of last year. You’re going to see that whether it’s large-cap or small-cap, value or growth, it was negative almost double digits across the board. Very poor year for the Unmanaged Stock Market Indexes. When we look out to the box that I’ve now put to the left, over the last ten years, that’s the average rates of return. You can see that that’s why we have to look at the averages, the annualized numbers, not just one year. You cannot make decisions based on just one year. That is an amateurs way to go through your portfolio life. 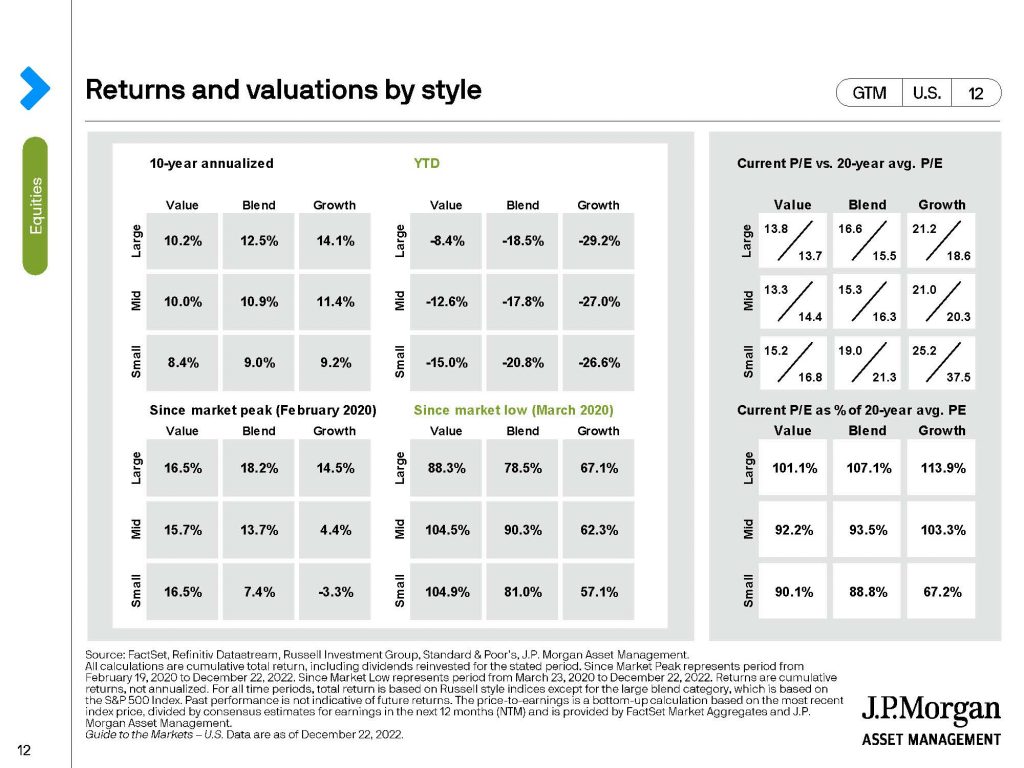 On the next screen, you’re going to see 40 years. Forty years of the S&P 500. Three out of four years are positive, which are the numbers above the axis. One out of four are negative. I’ve just circled the ones in the last ten years; there were three negative years. This was the worst year of the last 12 years, since 2008. You’ll see that that’s not every year. You’ll also see that it has happened that there’s been three years negative before. That was 2000, 2001, and 2002. I certainly hope that’s not going to be the case this time, but it could be. But we’re going to talk about that in a second. Let’s not assume that every year is going to be negative. As a matter of fact, after those three years, significant number of positive years above the axis, even after those three negative years. 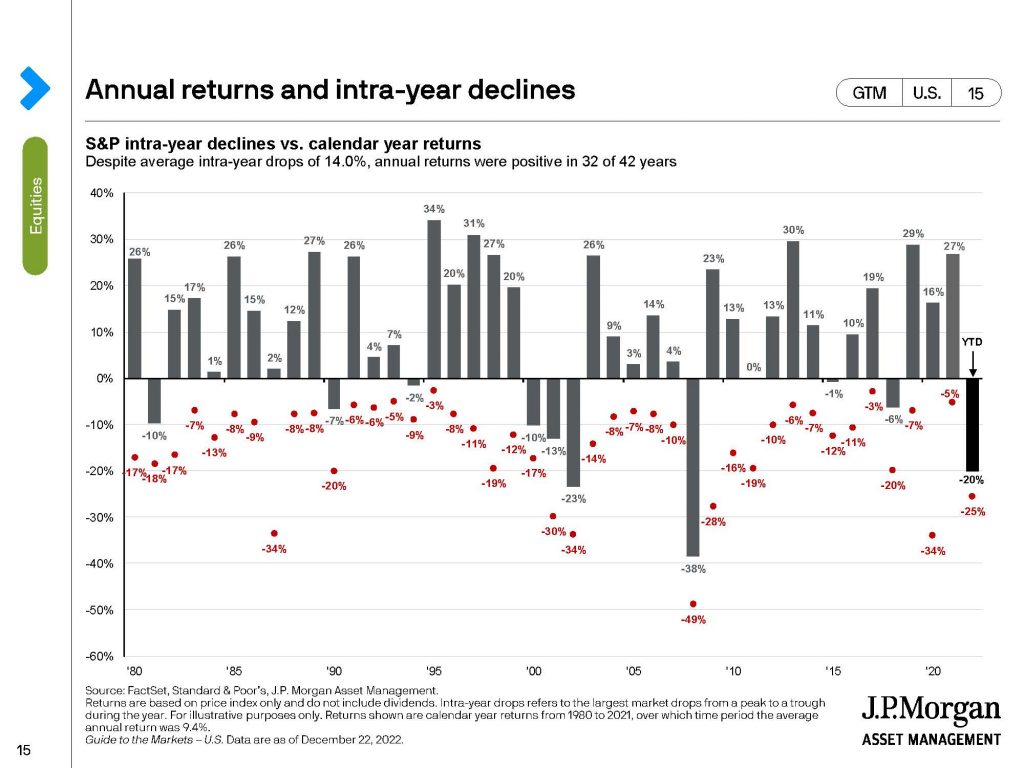 Why did some of this happen? This next chart shows the Federal Funds Rate, just what the Fed does. You’ll probably see this on TV, went from practically zero up to 4.38 percent. Significant. Look at how sharp it changed in one year. One year. That’s really dramatic. 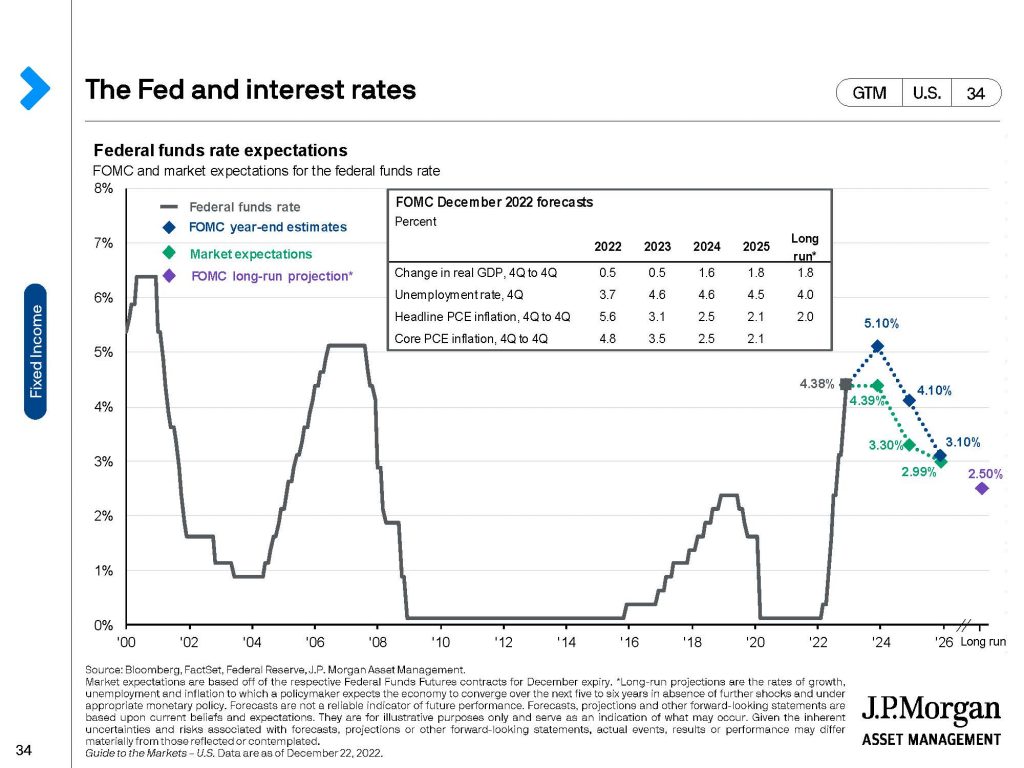 As we go, and I’ve just circled it. Some projections going forward over the next year or two, projections that will maybe go a little bit higher, possible. It depends on how the economy plays out or stays and goes down negative. Alright. But a very sharp correction in 2022. One of the two or three main factors for the poor performance that we had in 2022 was the dramatic reaction by the Fed to some underlying fiscal policies, a significant amount of money that was thrown out into the world and supply problems.

The next page, up on the screen, Fixed Income. These are bonds; these are Unmanaged Bond Indexes. You’re going to see this year, 2022, across the board, whether it was short, which is that top number there, all the way down to long-term bonds double digit declines. This is the first time in over 50 years where bonds and stocks have both gone down over ten percent. First time in 50 years. 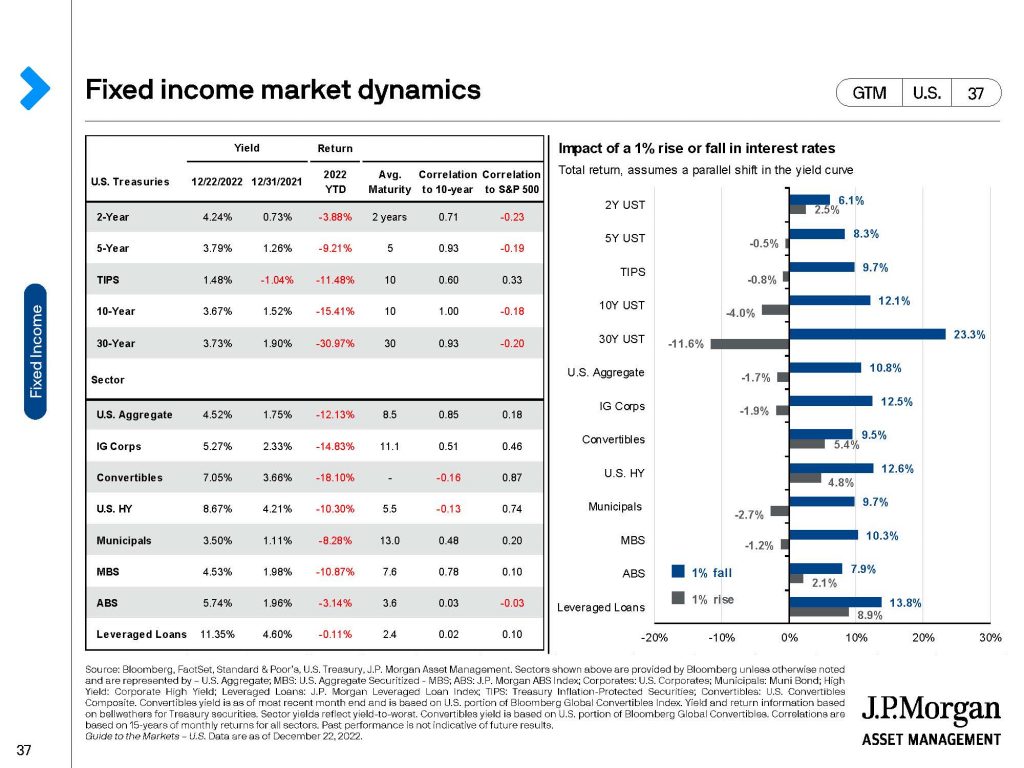 This is it for the last 30, 40 years. Forty years. You’re going to see that the vast majority of the year, above the X-axis for the Aggregate Bond Market, Unmanaged Bond Market is positive. This year it is not. That’s the exception, not the norm. We’re talking the late 70s as well. We’re talking years where inflation was significantly higher than even where it is right now. 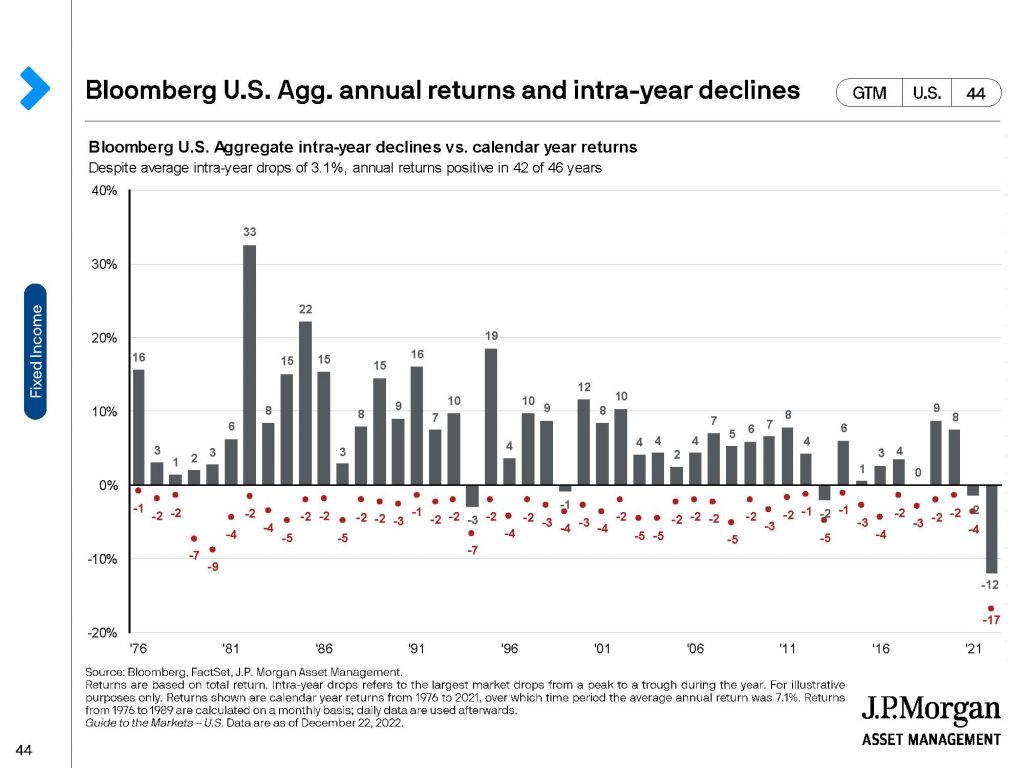 The next page, let’s talk a little bit about going forward. You’ve got the blue that I’ve just circled there is Consensus Analyst Estimates for Earnings Per Share (EPS). Yes, the S&P 500 Stocks on average in Aggregate have been beaten up. Some prices gone down, but the earnings are looking real good. 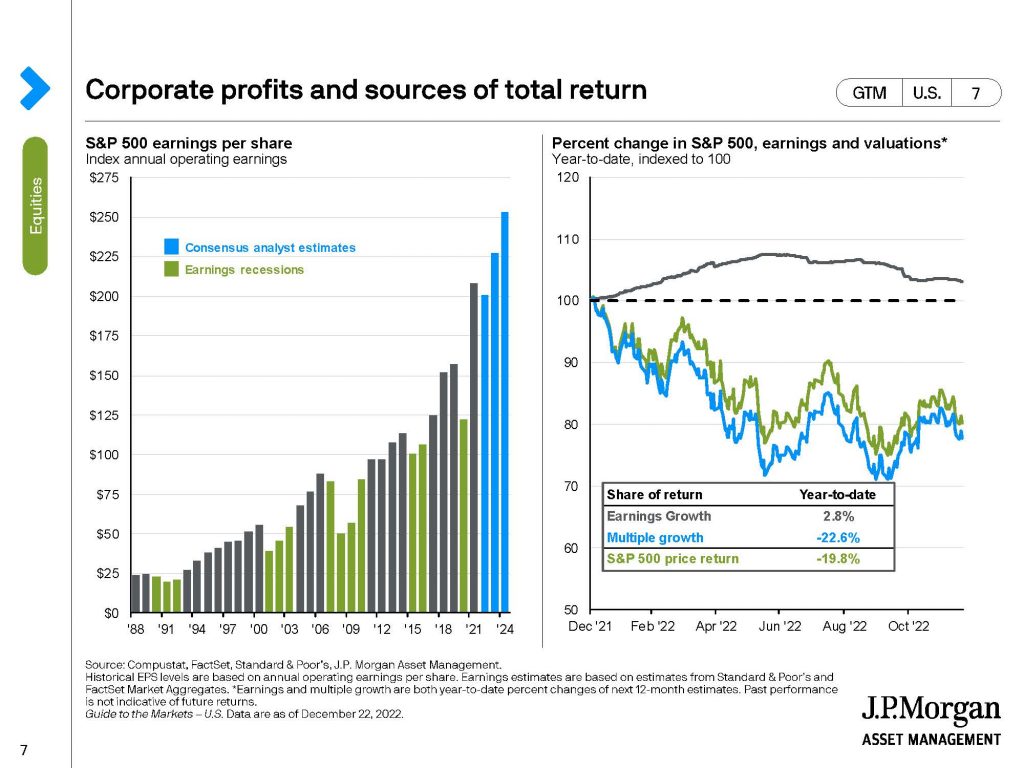 Right now, in the last two, three months, you’ve heard a significant amount of belt tightening with companies as they’re trying to be more efficient, trying to decide what the next year or two – a high probability that we might be in a recession, going forward for some time. But from a portfolio point of view, we want to be in a market that is perhaps underbought, oversold and that is still one of the things that we’re watching, that I’m watching.

You’re going to see here on the next screen, Global Supply Chains. Great. We’ve gotten through. That’s good that it’s gone down; that’s the thing that I just circled. It has decreased the time to get supplies to us. Is China continuing to be a problem? Yes. That whole Zero-COVID measures, not very helpful. To them or to the global supply chain. As we’re re-entering kind of a new normalcy, as they have basically changed that policy, this is a good thing. The geopolitical going forward, our relationship with China, both the United States and the world will play out in a significant manner over the next couple of years. 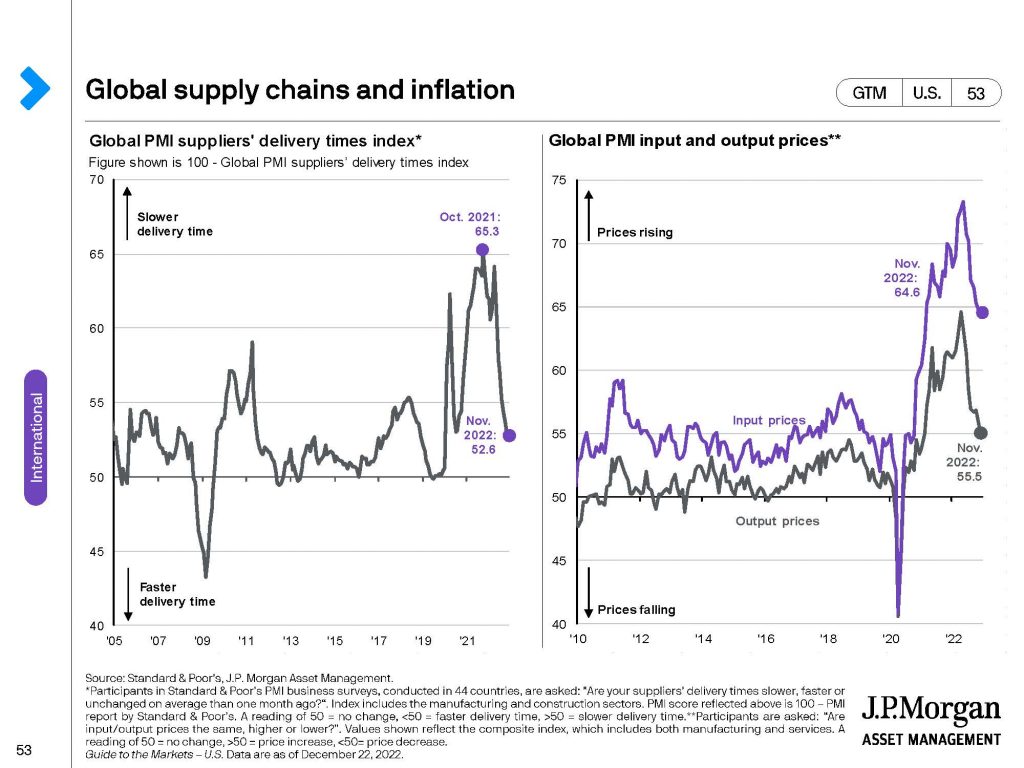 Kind of a last thing that I want to talk about from a chart point of view is that far right-hand side CDs – 6-month CD rate still relatively low on average the 2020 so far. The inflation is much higher than that. So, just keeping your money in Money Markets and CDs just isn’t going to work, where you lose money and purchasing power. 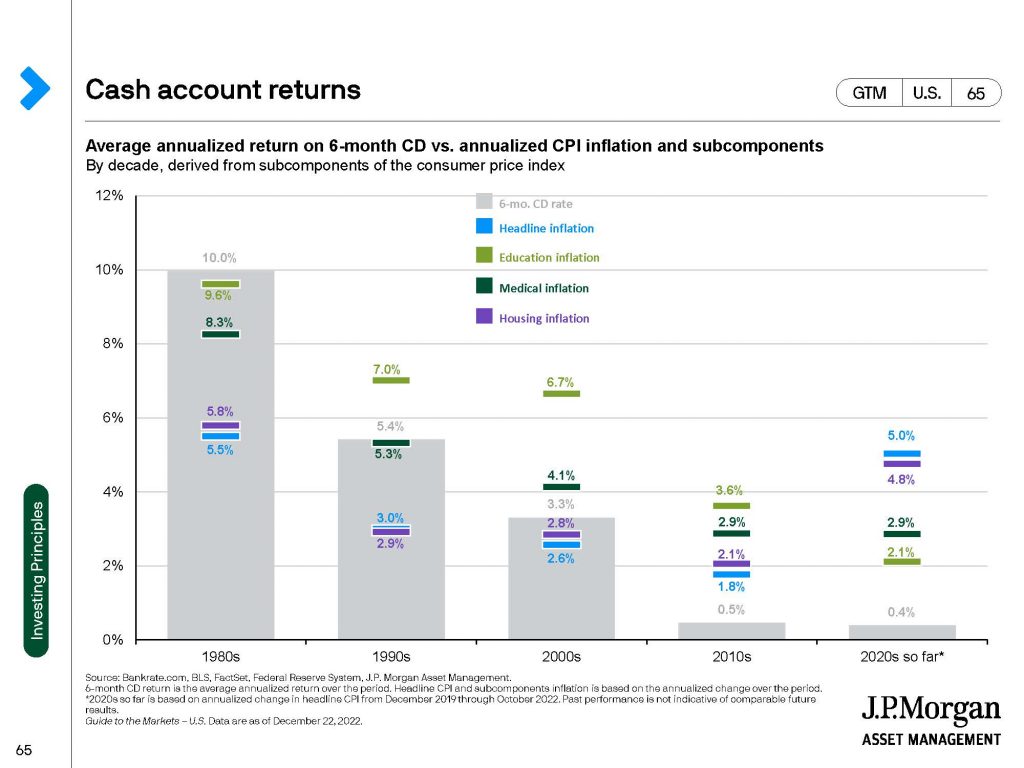 So we’ve got to, from my point of view, still stay invested. We have to understand that 2020 was a very bad year, huge shocks to the system. Huge shocks in the system that we’re still trying to kind of unwind and I believe in 2023 we will unwind these things. Do I believe that 2023 is going to be as bad as 2020? No, I do not. Will it be positive? I hope it will. Statistically, it has been. If we’re going to look back historically and statistically it will be a better year. But I don’t know. It is inherently an unknown because it’s about the future.

What we do want to do is make sure that we’ve got the right timeframe for our investments. If you’re going to need the money in the next year or two, you should be very low risk, okay. If on the other hand, you’re investing the money for three, five, ten, 20 years, I believe that you should continue with a good mix of equities and bonds going forward. It has served us well historically; I think it’s going to serve us well going forward as well. Even if 2022 – I think I keep saying 2020. I mean, 2022. Even if historically 2022 has been the exception to that, but let’s not say that just because it’s exception that it is the new norm. I just don’t believe it.