Powerful emotions drive irrational thinking in all areas of our lives. Twelve months ago we had an awful lot of irrational thinking. There was no way that anyone could have predicted that we would be where we are today, that the financial market would have not only recovered but experienced growth. It seemed like the recovery timeline should have taken longer, but it didn’t. But how did people fare? When you look back 12 months ago the people who made the best decisions were those that were in control of their emotions. Those who weren’t on the other hand, didn’t fare as well.

Let’s discuss why this is so and why looking long-term is always important, no matter what’s happening in the world.

I’m recording this on Tuesday afternoon March 30th and the unmanaged stock market indexes have basically reached all-time highs within the last month or so, which is not the situation that we saw ourselves in 12 months ago.  Let’s think back to where we were in March of 2020.  The market had just absolutely cratered, some of the worst days ever as a percentage loss, we’re talking plus or minus ten percent in one day in the unmanaged stock market indexes.  You remember how the Dow went all the way down to about 19,000?  Right now it’s over 33,000.  It had gone down from about 29 or 30 all the way down to 19.  I’m going to put a chart up on the screen.  At that point nobody was saying “oh yeah this is great, this is wonderful”.  No, there was a lot of pessimism. 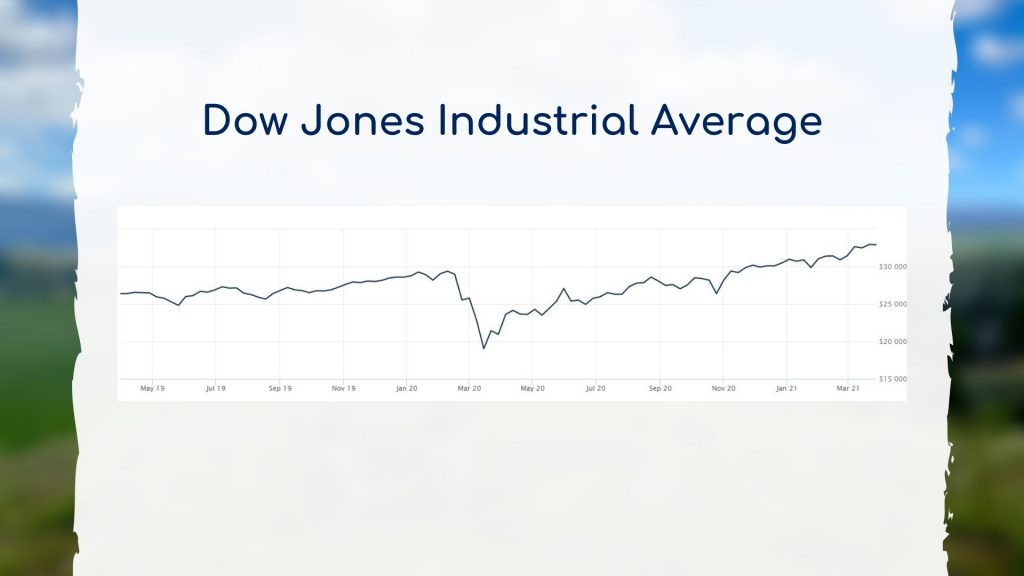 Twelve months ago we had an awful lot of irrational thinking.  There was no way that I thought at that point that we would be where we are today, that the recovery would be all the way back to where we are now and then some, but I felt strong that there was going to be a recovery, I just thought it was going to take a lot longer and there are reasons for that that are very complicated.  When you look back 12 months ago the people who made the worst decisions are those that were not in control of their emotions or those that listened to that guy on TV or the absolute negativity, there’s a confirmation bias, a negativity pessimism bias that many people have, which is you’re actually looking for negative things to confirm that everything is just all messed up and that Armageddon is right around the corner, which, of course, it was not then and it never turned into that as well.

Duration and your time horizon are absolutely essential.  I have said this pretty much every single video for the last 12 or 13 years because I feel so strongly about that.  This past quarter has been positive for the unmanaged stock market indexes, which is wonderful, continuing a trend that started about 12 months ago.  That recovery just continued on into 2021.  In general, the unmanaged bond indexes are about break even maybe even a little bit negative, but that happens sometimes.

We always have to take our investments into long-term consideration.  You might say to yourself “yeah but I’m 80 or I’m 85.”  Well, okay, your life expectancy is shorter than somebody who is 30 or 40 or 50, but you also have to think and ask yourself “am I investing this for just my own use or is my time horizon for the people who might inherit it?”  So, maybe the time horizon is longer than what you think.  If you’re just about to retire your mid 60s, perhaps you’re married, there’s a 50 percent probability that one of you will still be living by age 90 so your time horizon is still many five and ten year time horizons.

One of the things that, I’m just going to quickly look here, is we also have to remember to properly assess our skills.  There’s this concept called the Dunning Kruger Effect — remember Garrison Keillor he would always say all the children are above average, well we always have a tendency to think that we make the right decisions, that 12 months ago “oh yeah I just had a sense that the market was going to come back very quickly so I just had a sense that was going to happen”, which is very self-serving, a little bit of hindsight bias not quite remembering the way things played out.  We have to avoid that and keep the long-term into consideration.

I’m going to put a chart up on the screen, you’re going to see the one, the five, the ten and the 20 years, which is those three bars for each of those time horizons going all the way back to 1950.  So, that’s 71 years of an unmanaged stock market index, an unmanaged bond index and then a mixture of the two.  When you look out at the ten and the 20 year, which is what I believe that you should, you can see that they’re all positive.  There has never been actually even when we look at the five, a five, ten or 20 year time horizon where a mixture of bonds and stocks haven’t at least broke even or made a little bit of money.  When we let our emotions control our decisions all of a sudden we’re stuck on that short-term time horizon, which is that far left which is the one year or maybe even shorter than that in quarterly, month or even week. 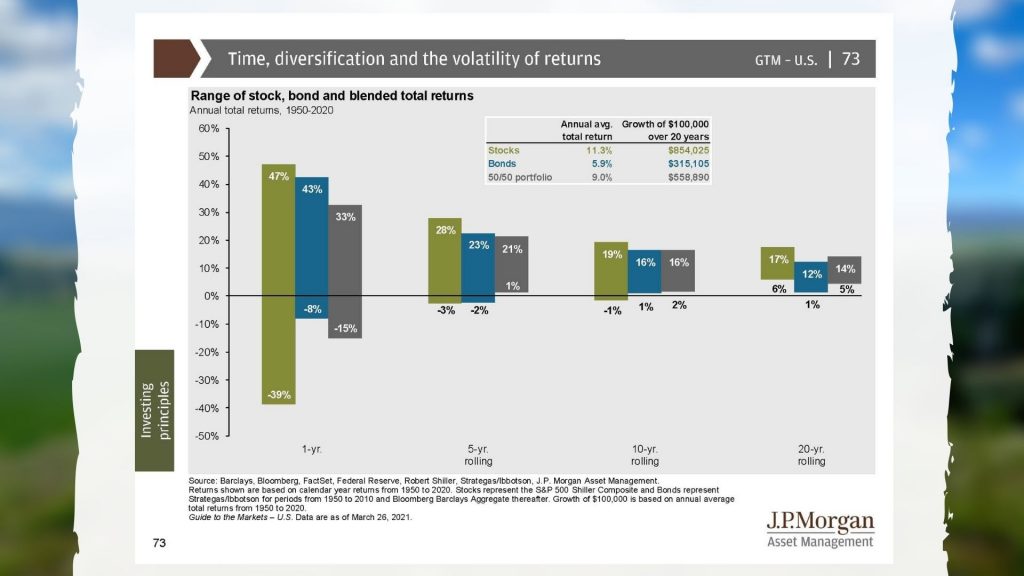 I can tell how long people have had an experience investing, many times I can tell by just the way they talk with me.  If something happens and they’re totally casual about it then they probably have some experience or they understand that maybe they’re hiring someone like me who has the experience of over 30 years to be cool as cucumbers when something unforeseeable has happened of a big nature.  You know what, we’ve kind of seen it all in different variations, sometimes more dramatic like we had last year, but these disruptions to the system have always happened and always will but what we can control is our reaction to them.

Mike Brady, Generosity Wealth Management.  I will have all the statements out in a week or so for all my clients.  I provide a statement a nice comprehensive statement at the end of every quarter so you can kind of see where things are going.  I’m always available to talk.  If you’re not my client would love to talk with you about what a long term ongoing relationship might look like.  303-747-6455.  Have a wonderful day.  Thanks.  Bye-bye.